The words “Legend” and “Icon” are often used in the music industry but they are no more fitting then when used to describe the incredible career of The Isley Brothers.

THE ISLEY BROTHERS FEATURING RONALD & ERNEST ISLEY
The words “Legend” and “Icon” are often used in the music industry but they are no more fitting then when used to describe the incredible career of The Isley Brothers. Inductees of the Rock & Roll Hall of Fame and winners of countless music and lifetime achievement awards, the Isley Brothers remain the only group to have charted hit records in five different decades.
Beginning in 1959 with the release of their first million-selling single “Shout” The Isley Brothers continued to make hit records even as the group’s personnel changed over time as they re-invented themselves again and again influencing other iconic artists along the way. Early in their careers Jimi Hendrix and Elton John actually toured as sidemen with The Isley Brothers and they have collaborated with or influenced the music of artists as diverse as Rod Stewart, R. Kelly, Snoop Dogg, and The Beatles.
A review of the Isley’s music is like a trip down memory lane including such hits as “Twist & Shout” “This Old Heart of Mine” “It’s your Thing” “Love the One Your With” “Who’s That Lady” “Summer Breeze” “Fight The Power” “Harvest for the World” “Atlanta” and “In between the Sheets.”
Originally from Lincoln Heights, OH a suburb of Cincinnati the initial group was a vocal quartet including brothers O’Kelly, Rudy, Ronald, and Vernon. Vernon died in a car accident, but the group decided to continue performing even as the family moved to Englewood, NJ in 1958 just prior to the release of their first hit record. They opened for the likes of Jackie Wilson until “Shout” gave them the platform to launch their amazing career.
They later signed with Atlantic Records while becoming industry pioneers forming their own record label T-Neck Records. The group eventually signed to Motown where they released a string of their hits and where brother Ernie Isley joined the group giving them the signature guitar sound they came to be associated with.
After decades of hits, when most groups simply disappear, Ronald Isley re-invented himself introducing his alter-ego “Mr Biggs” who reintroduced his music to the younger hip-hop generation through his collaborations with R. Kelly, Snoop Dogg, and Lil Kim.
Marvin and O’Kelly Isley died from natural causes leaving Ronald and Ernie, the “Voice” and signature guitar sound of the group as the only remaining performing brothers. Currently The Isley Brothers featuring Ronald & Ernie Isley are touring their incredible stage show throughout the world bringing their sound and performing their hits in front of sold out audiences everywhere. 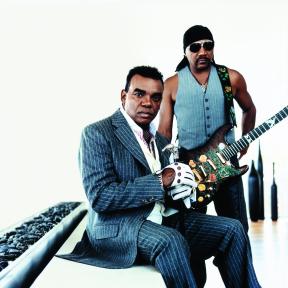 The words “Legend” and “Icon” are often used in the music industry but they are no more fitting then when used to describe the incredible career of The Isley Brothers.