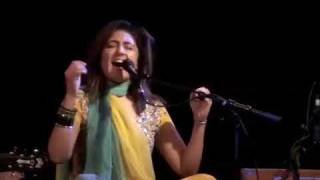 Expressing her muse through ghazals and Punjabi folk songs, Kiran Ahluwalia explores the language of the heart with beautiful artistry and smoldering intensity. Born in India, raised in Canada, and now living in New York City, her enchanting and seductive music has garnered glowing praise from critics around the world. Her’s is “a voice destined to enchant more than one generation” (fROOTS) and she possesses “a deep spirituality and tranquility that borders on the mystic” (Sing Out Magazine). But most of all, Kiran Ahluwalia is a unique and inspiring performer and composer, who’s legion of fans continues to grow with every captivating performance and each new recording project.
Kiran has long been on a path to mastery to sing and compose ghazals ¬ the sensual and highly literary poetry about unrequited love and passion for all things. “When I was growing up in India, very few people had recordings of any kind,” she recalls. “There were state sponsored concerts that people from all over would crowd into. These concerts were not primarily for children. They featured a repertoire, language and content that was both demanding and beyond the experience of a child. I was, however, entranced by the sound and feel of the music, even from an early age.” Seeing the strong connection Kiran had to this music, her father purchased a reel-to-reel tape machine on a visit to Hong Kong. “My father would play tapes of Indian music for me on the reel-to-reel and we would also listen to Bollywood on the radio”, Kiran recalls. “So when a song came on the radio that I wanted to learn, my mother would quickly write down the lyrics for me. Soon after, I would be singing it”.
Kiran immersed herself in Indian classical music and ghazals from the time she was seven. She spent a decade of intense deep study with her guru, Vithal Rao, starting in the early 1990s. Finally in 2001 she recorded her JUNO nominated debut CD, Kashish-Attraction. This was followed by the JUNO Award winning, Beyond Boundaries in 2003, then a self-titled compilation that was released world wide on the Triloka label in 2005 followed by JUNO nominated, Wanderlust (Time Square/World Connection) released in North America in 2007 and in Europe in 2008.
Kiran has made a career of transcending the boundaries often imposed on artists from outside the mainstream. On album, her compositions and arrangements have contributed to the evolution of the ghazal genre, through the subtle use of a multitude of sounds and styles from other cultures – including: Portuguese fado guitarra, sub Saharan percussion, Celtic fiddle, Pakistani qawwali vocals, the rhubab of Afghanistan and most recently African blues. In live performance she has also been a keen collaborator. Kiran has performed her compositions with the 33-piece Winnipeg Chamber Orchestra and the larger Chicago sinfonietta. She has also collaborated with jazz guitarist, Rez Abbasi, Inuit throat singer, Tanya Tagaq and electronica groups Delerium, and Eccodeck.
With each successive recording project, Kiran has moved ever onward from her own musical upbringing, reaching well beyond her extensive training in the genres of traditional ghazal and Punjabi folk song. Her compositions and arrangements are a reflection of an ongoing quest to create timeless music in a modern and global context, that looks to the future while still maintaining a vital through line to its storied past.
Her latest album is an inspiring step forward in the evolution of an artist firmly rooted in an Indian genre who is continually embracing influences from around the world. Now, on Aam Zameen, Kiran takes her penchant for fusing styles to a whole new level, by bringing to fruition her love for African Tuareg rhythms ¬ an infatuation that took root several years ago. She explains. “When you take two styles of music and merge them together – and you don’t want a simple cut and paste – then you are really trying to develop a hybrid genre. You’re doing something with no clear blueprints to help you. You have to figure it out by trying different things and seeing what works and what doesn’t. It’s scary and sometimes stressful, but it’s also incredibly invigorating when you find those connections between things that didn’t seem to connect before. Those moments of discovery are nothing short of sublime. It’s really the essence of everything for me.”