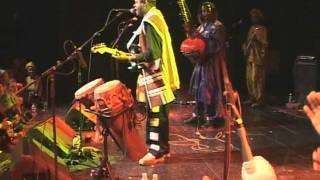 Alpha Yaya Diallo, guitarist, singer, songwriter is a true multi-cultural Canadian artist performing in French, Eng-lish and his native Guinean languages of Foulani and Souso. Diallo is a multi-talented artist whose dexterous acoustic and electric guitar-playing, with its fluid melodic lines and compelling grooves, places him in the front ranks of African musicians. While his band, Bafing, features high energy African rhythms, visually stunning dancers and a dynamic percussion section. Alpha was discovered in the late 1980’s by Peter Gabriel’s Real World Records when he was lead guitarist for Fatala. Born in Guinea, West Africa, Diallo was frequently on the move with his family, growing up in a number of regions. He was exposed to a variety of cultures and musical traditions from the Malenke, Sousou, and his own Foulani people. During the time he spent in neighbouring Senegal, Diallo picked up the popular and powerful mbalax rhythm—as well as influences from Cape Verde and the Caribbean. By uniting the traditional and the contemporary, Diallo has carved a niche for himself beside such West African luminaries as Salif Keita, Baaba Maal, Youssou N’Dour, and Ismael Lo. With five highly-acclaimed albums of his own compositions, including Juno Award winners The Message and The Journey, it was a natural fit for him to take part in the hugely successful African Guitar Summit concert at Glenn Gould Studio in Toronto with Pa Joe, Mighty Popo, Madagascar Slim, Adam Solomon, and Donné Robert. The concert led to two recordings released by CBC Records, and a Juno Award for African Guitar Summit. 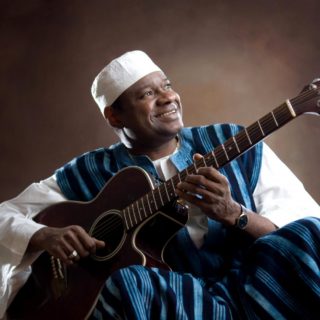