“Chicago-based jazz singer Dee Alexander is no stranger to high praise. In 2012 she was the recipient of the Illinois African-American Heritage Award for her contribution to the arts. Her 2009 album Wild Is The Wind (Blujazz) received a 5-star review and critical raves are piling up for her new Blujazz disc, Songs My Mother Loves.” (DownBeat Magazine)

“My mother gave me a great gift by weaving music into my life, and I now pay tribute to her with my new album Songs My Mother Loves, giving thanks for her inspiration, influence and guidance”, says Alexander.

Alexander grew up on the West Side of Chicago surrounded by the music of Billie Holiday, Dinah Washington and Nina Simone.

Alexander’s versions of all-time highs and standards are both full of the singer’s improvisational power as well as of her ability to strive for the song’s inner emotional trueness with an “elastic” voice of soft love.

While most of the songs Alexander delivers are well known gems from the Great American Songbook, her interpretation is pure authenticity within the black music soul of the USA today …

Introducing her to the European audiences is one of the major priorities of PAO Records mastermind Paul Zauner releasing her new album on PAO in Europe. Zauner is known for his “discovery journeys” to America, recently appraised for bringing this year’s Grammy®-winner Gregory Porter to European audiences only some 3-4 years ago. This lady might just be one of the next “discoveries” in the jazz for 2015 and 2016 … 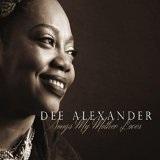