Najma Akhtar, vocalist, composer and actor, has been at the forefront of the World Music scene for the last two decades.

Najma Akhtar, vocalist, composer and actor, has been at the forefront of the World Music scene for the last two decades.  Although born and raised in England, Najma has remained rooted in the music of India, her ancestral home. In creating a beautiful fusion of eastern and western styles, Najma always brings her own musical heritage into the spotlight while eliminating all musical boundaries.

In 1987, Najma released her first recording, “Qareeb” (Closeness).  “Qareeb”, universally acclaimed as a groundbreaking recording in World Music, is a fusion of Jazz and Indian Ghazals based on Urdu poems.  Najma’s follow up to “Qareeb”, “Atish” (Fire), released in 1989, reached #4 on Billboard’s World Music Chart and combines a number of musical styles, including Qawwali.  Najma’s third recording, “Pukar” (Calling You), was released in 1992 and includes a mix of Persian, Indian and African instruments.  The title track was used in a Fuji Bank television commercial in Japan, where sales of “Pukar” reached upwards of 50,000 copies.  In 1996, Najma released “Forbidden Kiss” which is a beautiful tribute to legendary Indian composer S.D. Burman, equivalent in South Asia to George Gershwin or Irving Berlin.  On this tribute, Najma collaborates with Chris Rael from the New York City group Church of Betty.  Najma’s latest recording, “Vivid”, released in 2002, is described by Najma as “Indian Gothic.”  “Vivid” combines elements of Indian, Arabic and Western classical music.

Najma has collaborated with many of the world’s most influential musical artists including, Jah Wobble, “Take me to God”; Andy Summers, “The Golden Wire”; Philip Glass, “Liquid Days”; Steve Coleman, “Black Science”; Jethro Tull, “Dot Com”.  Ian Anderson said, “Najma Akhtar is the premier lady Indian (Asian) singer on the planet.”   Najma has also recorded and toured with Robert Plant and Jimmy Page.   Najma appeared with Plant and Page on their MTV unplugged special which was recorded and released as a DVD and an album titled “No Quarter”.  Robert Plant had this to say about Najma, “Najma Akhtar, who sang with us on the film, practices with this box which gives her like three notes in a different rag. And she just wails between these notes. I’ve spent time with her when she is just wandering around and this box is giving out these amazing tones. It’s trippy like you’ve got the incense on, a picture of Leonard Cohen on the wall, her singing.”

The emphasis is the voice as it sings the stories, the universal unrequited love theme, the Ghazal, the Ballad, the Blues.
Five Rivers
Constantly being inspired by new sounds and musical genres, UK vocalist, songwriter, Najma, explores the synergies that resonate with her Asian – British roots by connecting vocal expressions of unrequited love through the waterways of voice, poetry and music.
Based on subtle combinations of Delta blues, World Jazz, Western Folk Music, Irish / Celtic Folk Music, Rock, North African Blues, Sufi, Najma comfortably explores a few selected classic covers with an Indian Vocal twist.
‘Five Rivers’ is a musical journey that starts in India with the Ganges, to Africa the River Niger, to the UK with the River Thames on to Ireland with the River Shannon and finally ending at the Mississippi Delta.

Jac Holzman, who signed the band ‘Love’ in the sixties and former owner of Elektra Records, upon hearing Najma’s interpretation on the song ‘Old Man’ wrote, ‘Najma, I so enjoyed what you did with Bryans song, one of the unsung gems on Forever Changes. Your take is original, understated and true to the spirit of the original. Most important — it works!’

Najma’s chosen arrangements for guitar, bass, tabla, violin and percussion provide the perfect musical environment for the unique intelligence and sensitivity of her voice, which, whether she sings a ghazal, a ballad or a slow blues, resonates with truth & beauty.

The breadth & depth of Najma’s vision of universality is exemplified by her beautiful rendition of Yeat’s,”The Song of Wandering Aengus,’   (inspired by Donovan’s arrangement) Donovan’s ‘Young Girl Blues’ & Jagger / Richard’s  ‘As Tears Go By’.

Known for creating beautiful lilting fusions of eastern and western styles Najma continues to pushes the sound barriers by synergising other eclectic influences to even newer and undiscovered frontiers. Five Rivers is the dynamic and natural progression of Najma’s continued exploration of poetic expressions of the west and is a
perfect follow up, to her critically acclaimed 2009 collaboration with Grammy nominated guitarist, Gary Lucas ‘Rishte’ which received phenomenal reviews.

‘Rishte’ was David Fricke’s Pick of the Month in Rolling Stone Magazine and received four stars from Mojo Magazine’s Dave Barnes who wrote of it, “Rishte is a vital and red blooded nodding back to Davy Grahams East-West musical explorations, and stands comparison with his best work”.

Najma sings not only in Hindi / Urdu / Punjabi but as English is her first language, it allows her to comfortably explore the bi-lingual aspect and the synergies that connect them are multifarious.
Najma’s influences, in both time and place flow from the banks of these rivers and her gift is in her recognition of the collective universality of these sources.

Najma, is very excited about this project, as, it is the first time that the poetic emphasis between the Urdu Ghazal and Western poetry has been explored and developed using western musical genres. 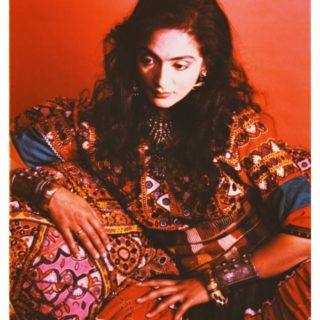 Najma Akhtar, vocalist, composer and actor, has been at the forefront of the World Music scene for the last two decades.