She made her debut with jazz pianist George Duke. She is a remarkable drummer and percussionist and also plays violin and guitar. She had also played with Lionel Richie, Marvin Gaye, Herbie Hancock, and Diana Ross by the time she was in her early twenties. Other notable performances and collaborations have taken place with Natalie Cole, George Duke, Stevie Wonder, Stevie Nicks, Patti Labelle, Cecilia Cruz, Billy Cobham, and Miles Davis.

Collaborating with the music artist Prince, she proved to be a first-rate artist in her own right. In 1984 she scored hits with “The Glamorous Life” (Hot 100 #7, and regarded as something of an ’80s classic), “The Belle Of St. Mark” (#34) and “A Love Bizarre” (#11). Sheila E. was nominated for American Music Awards and Grammys for “The Glamorous Life,” and opened for Prince on his wildly successful Purple Rain Tour in 1984–85. Sheila recorded three albums during the ’80s, The Glamorous Life, Romance 1600, and Sheila E. She appeared in three films, Krush Groove with Run-DMC, LL Cool J and Blair Underwood in 1985, Prince’s concert film, Sign ‘O’ the Times in 1987 and Chasing Papi in 2003. And, she is well-known for her co-vocals with Prince (musician) on his most famous B-side single, “Erotic City,” from 1984.

During the Sign ‘O’ the Times and Lovesexy period of Prince’s career, including the Lovesexy World Tour, she served as his drummer and musical director in his highly regarded backup band, dubbed the New Power Generation. She also served as a writer and musician on many of Prince’s records, as well as on the albums of his protégées such as Madhouse. After leaving the Prince organization in 1989, Sheila recorded a few more albums, Sex Cymbal, Writes of Passage, and Heaven. However, a serious issue with her health at the time prevented her from promoting Sex Cymbal, and the album garnered little attention.

Sheila E. was the leader of the house band on the short-lived 1998 late night talk show, The Magic Hour, starring Magic Johnson. Sheila E. has performed three stints with Ringo Starr & His All Starr Band, in 2001, 2003, and 2006. Her drum “duets” with Starr are a moment of comic relief in the show, where they play the same parts but he quickly falls behind, shrugs and smiles as she takes off on an extended percussion solo.

In 2009, Sheila E. won the CMT reality show, Gone Country. This gave her an opportunity to make country music aided by the country producer, writer, and singer John Rich. Sheila E.’s first song in the country market was “Glorious Train”. A video for the song debuted on CMT on March 7, 2009, following the airing of the episode of Gone Country in which Sheila E. was announced the winner.

On October 13, 2009 Sheila E was band leader for the PBS special, “Performance at the White House: Fiesta Latina” hosted by President Barack Obama and First Lady Michelle Obama. In 2010 Sheila was nominated for an Emmy for Outstanding Music Direction for this special.

2012 Sheila collaborates with Hans Zimmer on music for the upcoming film Madagascar and in the music production for the 2012 Academy Awards show. In 2013, she continued her work with Zimmer by contributing to the soundtrack for Man of Steel.

Sheila E presently continues her worldwide performances, writing, music business, philanthropy, Christian outreach, and charitable work. She is also a Governor on the board of Trustees for the Grammys.

Upcoming projects for Sheila E. include her new album, (set for release in early 2014), an autobiography (2014), a documentary, other television projects and a European and U.S. tour.

Other collaborations and Performances

After leaving the Prince organization in 1989, Sheila E. recorded a few more albums, Sex Cymbal, Writes of Passage, and Heaven. However, the albums garnered little attention. This was especially true in the case of Sex Cymbal, since Sheila E.’s health issues prevented her from touring in order to promote it.
In 1996 she played in Japanese pop singer Namie Amuro’s live backup band. The show at Chiba Marine Stadium is available on DVD. In 1998 She played percussion on the Phil Collins cover of “True Colors”. In 2002 Sheila E. appeared on the Beyoncé Knowles song “Work It Out”.
Sheila E. has performed three stints with Ringo Starr & His All-Starr Band, in 2001, 2003, and 2006. Her drum “duets” with Starr are a moment of comic relief in the show, where they play the same parts but he quickly falls behind, shrugs and smiles as she takes off on an extended percussion solo. Says Sheila E.: “Ringo truly is one of the greatest rock n’ roll drummers in the history of music. He enjoys the joke!”
In 2004, Sheila E. toured New Zealand as drummer and percussionist for the Abe Laboriel Band.
In 2004, Sheila E. was also featured on Tonex’s Gold Album OUT THE BOX on the song “Todos Juntos”. She also play drums on Cyndi Lauper’s hit album of standard covers, At Last. She played percussion on the song “Stay”. Sheila E. joined Lauper on a live version of that song on VH1 Divas.
In 2005, Sheila E. was a surprise guest orchestrating a band, in Amerie’s “1 Thing” performances for The Lady Of Soul & World Music Awards.
In February 2006, Sheila E. performed with Prince (and Wendy Melvoin and Lisa Coleman) once again at the BRIT Awards.
Sheila E. performed at the Sonoma Jazz Festival in 2006 as part of Herbie Hancock’s band featuring Larry Carlton, Terrence Blanchard, Marcus Miller, and Terri Lyne Carrington.
She also performed at Prince’s One Nite Alone… Live! concert, Live at the Aladdin Las Vegas in 2003, 36th NAACP Image Awards in 2005, and on the Good Morning show in June 2006.
In March 2007, she went on a small tour through Europe with her new band project called C.O.E.D. (Chronicles of Every Diva). C.O.E.D. consists of Sheila E., Kat Dyson, Rhonda Smith and Cassandra O’Neal. For several concerts she was joined by Candy Dulfer, who was billed as a special guest.
She performed at the 2007 Latin Grammy Awards with Juan Luis Guerra. She also performed at the ALMA (American Latin Music Awards) Awards in June 2007 with Prince, and on July 7, 2007 in Minneapolis with Prince. She performed at all three of his concerts: first, at Prince’s 3121 perfume launch at Macy’s, followed by the Target Center concert, and finally, at an aftershow at First Avenue.
In October 2007, Sheila E. was a judge alongside Australian Idol judge and marketing manager Ian “Dicko” Dickson and Goo Goo Dolls lead singer John Rzeznik on the Fox network’s The Next Great American Band.
Sheila E. met with Prince on March 29, 2008, who sat in on (and played keyboard) on Sheila E.’s performance with her family at Harvelle Redondo Beach.
On April 9, 2008, Sheila E. appeared on the Emmy winning program, Idol Gives Back. Shelia E. took part in the show opener “Get on Your Feet” with Gloria Estefan. Dance troupe, So You Think You Can Dance finalists joined them on stage.
On April 26, 2008, Sheila E., along with Morris Day and Jerome Benton, performed with Prince at the Coachella Music Festival.
From May 2 to 6th, 2008, Sheila E. played four sold-out shows at Blue Note Tokyo in Japan. This is the most frequented jazz music club in Tokyo.
On June 14, 2008, Sheila E. performed at the Rhythm on the Vine music and wine festival at the South Coast Winery in Temecula, California for Shriners Hospital for Children. She took the stage with the E Family, Pete Escovedo, Juan Escovedo and Peter Michael Escovedo. Other performers at the event were jazz musician Herbie Hancock, contemporary music artist Jim Brickman and Kirk Whalum.[4]
In February 2009, she was made an honorary member of Tau Beta Sigma National Honorary Band Sorority by the Eta Delta Chapter located at Howard University in recognition of her humanitarian efforts through and in music.
On May 30, 2009, Sheila E. and the E Family Band performed at Rhythm on the Vine at Gainey Vineyard in Santa Ynez, California for the Hot Latin Beats concert. Also to perform at the concert is Poncho Sanchez.[5]
On December 13, 2009, Sheila E. performed at the Deryck Walcott produced Christmas Jazz held at the Plantation Restaurant in Barbados.
Sheila E. has collaborated many times with other artists, notably with Gloria Estefan for whom she played the timbales. Sheila E. first collaborated with Estefan on Estefan’s first Spanish language studio album Mi Tierra in 1993, and in 2007 with Estefan’s smash hit “No Llores” in which Estefan also collaborates with Carlos Santana and José Feliciano. She also is one fourth of the band C.O.E.D. (Chronicles of Every Diva), who as of 2008 are touring overseas and released a CD available in limited distribution or through her website.
Sheila E. performed at Yoshi’s in San Francisco on August 15, 2010 and she released an EP From E 2 U. It includes a song “Leader of the Band” written by Prince and it features Prince on piano.[6] She toured on his 20Ten Tour and Welcome 2 America tours.[7][8]
In 2010, Sheila E joined forces with Avon as a celebrity judge for Avon Voices,[9] Avon’s first ever global, online singing talent search for women and songwriting competition for men and women.
On May 25, 2011, she performed alongside Marc Anthony in the American Idol Season 10 finale.
On June 7, 2011, she performed on The Late Show with David Letterman as a part of the show’s first “Drum Solo Week”. 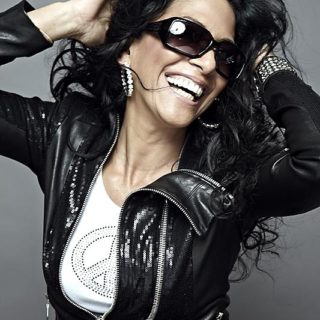