It has been a little over three years since we last received recording news from Alpha Blondy. Naturally, the man who put Ivory Coast on the reggae map by proving the genre was not exclusive to Jamaica has continued to tour the world with his band, Solar System. On the record front however, Alpha had been silent since Jah Victory, released in October 2007.
Let’s get one thing out of the way: Vision is worth every single minute of the wait. It surpasses expectations. All thirteen of its tracks are pure, vintage Blondy – politically conscious and lovingly fine-tuned – and celebrate the French and Dioula languages while covering a broad palette of sounds.

“The vision for Vision came to me as I was finishing Jah Victory”, Alpha explains. “The musicians and I worked in my various hotel rooms as I own a mobile studio, a ‘rolling’ studio as I like to call it. Each time we stopped in a city we recorded a little more. Buenos Aires, Recife, Rio De Janeiro and Porto Alegre in Brazil, Zurich in Switzerland, Germany, Belgium, Montpellier, Marseille…We poured the whole thing into a computer when we returned to Paris, and the musicians used it as a basis to play”.

Right from the outset – inspired opening track “Rasta Bourgeois” – the wide scope of this richly arranged record can be felt. “The bourgeois Rasta is a vision. What’s the point in idealising poverty and highlighting its exotic side? Articles on Rastafarian culture always show photos of kids walking around bare-foot in ghettos. Our poverty is neither exotic nor touristy. Rastas are entitled to a decent, bourgeois life if they so wish. They have the right to send their children to school. Poverty is not compulsory, nor is it a profession nor a trend”.

“Stewball”, the only cover on Vision, is an adaptation of Hughes Aufray’s 1966 song, the woeful tale of an amazing racehorse that ends up being shot by the vet after a nasty fall during a race. “I was lucky enough to meet Mr Hugues Aufray in 1998 in Ivory Coast. I told him how I used to sing ‘Stewball’ in school and that I wanted to do a reggae version of the song, which really moved him. I wanted his approval and he granted it. I saw him again a couple years ago and he reminded me that he was still waiting for my cover. I have to admit I felt a little embarrassed, so I put it at the top of our list and we managed to do a proper reggae version. I sent it to him and he came back to me saying he was over the moon and very proud. We’ve all shed tears listening to this classic, that’s why I say ‘the nasty vet’. We’ve all hated the guy!”

“Vuvuzela” was written in Johannesburg, South Africa. “The musicians and I were sitting at a terrace, watching girls go by, and we could hear the sound of vuvuzelas… That’s how the song came to be. ‘Protect your vuvuzela before you waka-waka’! In Africa – and elsewhere – young people have started to forget about condoms. They need a reminder you know”. Prophylactic Alpha!

“Stewball” and “Rasta Bourgeois” feature Jamaican guests, the mythical Gladiators, who brought along their skank and unmistakable vocals. Another guest on the album is Ismael Lo, who plays harmonica on “C’est Magic”. Unlike those lazy artists who rely on their guests, Alpha really got stuck in. He produced, wrote and sang the whole of this visionary album, which came to be with the help of Solar System, his faithful gang of musicians from Barbados, France, Ivory Coast and Jamaica. The band’s cohesiveness shines through the glimmering brass parts, brazen rhythms, hypnotic basslines and the virtuosity of sound experts Tyrone Downie and Dennis Bowell.

The most intimate song on the album is probably “Ma Tête”, which traces the sometimes bitter adventures of Alpha the star. “When you become a famous singer, politicians tend to use you. They say you’re an opinion leader, but you’d better not give an opinion that they don’t approve of! They let loose the newshounds on you, they put you down in their papers… It has been like that for me ever since Houphouët-Boigny was in power. I don’t mince my words when it comes to politics, so I get criticised whenever I say anything. Writing ‘Guerre Civile’ got me molested. Same for ‘Jérusalem’ and ‘Course Au Pouvoir’. But when the civil war came, when the coup d’état came, they all said I’d been right all the time”.

Alpha Blondy has nothing left to prove. Yet he continues to amaze us. “I just do my thing, I want to do the best job possible. African reggae is my baby, I’m still its driving force and I don’t really take anything else into account. Vision is a crossover album, complete with all three dimensions of reggae: roots, rock and reggae. It reflects my musical culture”. 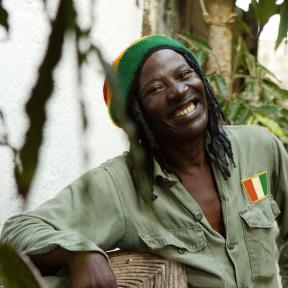