The Barclay James Harvest story begins in the early sixties in the Oldham area of North-West England. John Lees and Stuart “Woolly” Wolstenholme met at Oldham Art School, and formed a band called The Sorcerers, which evolved into The Keepers. Meanwhile Les Holroyd and Mel Pritchard were playing in another local outfit rejoicing in the

The Barclay James Harvest story begins in the early sixties in the Oldham area of North-West England. John Lees and Stuart “Woolly” Wolstenholme met at Oldham Art School, and formed a band called The Sorcerers, which evolved into The Keepers. Meanwhile Les Holroyd and Mel Pritchard were playing in another local outfit rejoicing in the name of Heart And Soul And The Wickeds. In 1966 a new band was formed from a fusion of the two and performed live shows on a semi-professional basis as The Blues Keepers. The resulting six-piece gradually dwindled to a stable quartet comprising Holroyd, Pritchard, Lees and Wolstenholme, and in the summer of 1967 they turned professional with a new name selected by putting names into a hat, and Barclay James Harvest was born.

Under the patronage of John Crowther, a local businessman and their first manager, they moved into an 18th Century farmhouse called Preston House to write and rehearse, and their spartan lifestyle was captured in a short documentary film made for Granada TV. A one-off single deal was negotiated with EMI’s Parlophone label, and “Early Morning” appeared in April 1968, attracting acclaim and the opportunity to record radio sessions for John Peel. This in turn led to a contract with EMI as the band became one of the first signings to the legendary Harvest label, releasing “Brother Thrush” as their second single in June 1969.

From the very beginning, BJH experimented with new forms, going beyond the traditional guitar, bass and drums format to include woodwind, strings and brass, then acquiring a Mellotron to simulate the sound of an orchestra. It was a logical step, then, to record their debut album, Barclay James Harvest, with their own orchestra led by “Resident Musical Director” Robert Godfrey, later of The Enid, and to back the release of the album in June 1970 with a short orchestral tour. 1971 saw them perfecting their fusion of rock and classical music with the seminal albums Once Again and Barclay James Harvest And Other Short Stories and ambitious live performances which, while stunning their audiences, did nothing to impress the record company accountants! Mounting debts and strained relations with EMI led to a couple of abortive efforts at commercial singles and a slightly below-par 1972 album, Baby James Harvest, which led to a parting with the Harvest label in 1973.

Fortunately the crisis which threatened to finish the band was averted when they were signed up by Polydor and began to enjoy greater commercial success. 1974’s studio set, Everyone Is Everybody Else, was followed later that year by Barclay James Harvest Live, a double LP which became their first chart album. Time Honoured Ghosts (1975) and Octoberon (1976) saw them building on their achievements and selling out the now-traditional autumn tours of the UK, whilst exploring new territory abroad with short tours of West Germany and the U.S.A. 1977’s Gone To Earth opened up a new market for them in Germany, where the LP became a fixture in the charts, prompting EMI to repackage their back catalogue and belatedly to issue John’s solo album, A Major Fancy, recorded in 1972 but shelved when the band left Harvest. In 1978 a second live set, Live Tapes, paved the way for a new studio album, XII, and an extended tour of Britain and Europe. Then in 1979, just as rehearsals began for a new album, Woolly announced that he was dissatisfied with the band’s musical direction, and that he was leaving to pursue a solo career. He subsequently released an album called Mæstoso in 1980, toured with Judie Tzuke and Saga with his Mæstoso band and started recording a second album, Black Box, which was shelved. He then retired from the music business to live and work on his own organic farm.

The remaining trio resolved to go it alone, augmenting their sound with session musicians where necessary. Eyes Of The Universe, which appeared in January 1980, presented a less complex, more commercial side of BJH, and resulted in spectacular sales in Europe, particularly in Germany where it rapidly went platinum with over half a million sales. The first four months of the year were taken up with an extensive European tour, and on August 30th 175,000 people turned out to see a free concert on the steps of the historic Reichstag, in the heart of the divided city of Berlin. “Life Is For Living”, premiered at that historic show, became a hit single throughout much of Europe and acted as a trailer for 1981’s Turn Of The Tide album and tour. Much of 1982 was spent on the road, and a live album of Berlin – A Concert For The People went straight to No. 1 in Germany. Even in Britain, where success had proved harder to sustain, the LP reached No.15 and revitalised interest in the band.

Two albums in quick succession, Ring Of Changes and Victims Of Circumstance, again clocked up telephone number sales and brought a new generation of fans to the 1984 tour, particularly in France, but many older followers felt that Pip Williams’ lush commercial production swamped BJH’s individuality and subtlety. A long lay-off followed, while they considered their future direction, fuelling rumours that they had decided to call it a day. Much to the delight of the faithful, the silence was broken at the end of 1986, with the single “He Said Love”, followed by an album early in 1987. Face To Face marked a return to the traditional BJH sound, and this was confirmed on another massive tour of Britain and Europe, including several festivals. One of these took place in East Berlin’s Treptower Park on July 14th, 1987 in front of an estimated 170,000 fans, the first time that a western rock band had performed an open-air concert in what was then East Germany; a live recording was released as the album and video Glasnost in 1988.

BJH then retreated to their homes in Saddleworth to write new material and prepare to bring their music into the Nineties. The result was Welcome To The Show, issued in March 1990 Produced by Jon Astley and Andy MacPherson, the album incorporated the classic BJH trademarks of memorable songs and beautiful harmonies within a melodic rock framework, but brought them up to date with state-of-the-art digital recording and intelligent production. 1992 saw the band embark on a 25th Anniversary Tour of Britain and Europe, which coincided with the UK release of The Best Of Barclay James Harvest, a slightly different version of which had already gone gold in Germany. The next studio effort, 1993’s Caught In The Light, was a very low-key affair which was not well-received by the record company, although many fans loved it, and with little promotion the album sold poorly, leading to BJH being dropped by Polydor UK. Things went from bad to worse in 1994 as a long-running court action brought against the band by former arranger Robert Godfrey threatened to destroy them. However, the court actions were dismissed in March 1995, following which the band began writing new songs, and in April 1996 a new record contract was agreed with Polydor in Germany. The result was a brand new studio set, River Of Dreams, which was released in May 1997 in Germany and Switzerland only, and was followed up by a tour of those countries.

In March 1998 it was announced that the band would be taking a sabbatical, in effect marking the end of the original Barclay James Harvest, and that the members of the band would be pursuing solo projects. For his album, John worked with Woolly for the first time in twenty years, plus bassist Craig Fletcher and drummer Kevin Whitehead, under the name Barclay James Harvest Through The Eyes Of John Lees. This line-up recorded an album of half new songs, half re-recordings of BJH classics, entitled Nexus, which was released by Eagle Records in February 1999. A tour of Germany and Switzerland followed and was recorded for the Revival – Live 1999 CD which appeared in March 2000, after which there were more concerts in Germany and Greece, plus the first concerts in England by any of the band members since 1992.

In the meantime, Les Holroyd was also working on a solo album together with Mel Pritchard and others, and Revolution Days was released as Barclay James Harvest Featuring Les Holroyd in February 2002. This band undertook a number of festivals and two tours in France, Germany, Holland and Switzerland, and the live show was captured on the Live In Bonn, 30th October 2002 CD. Tragically, in January 2004, just after returning from some live shows in Switzerland, Mel suffered a heart attack brought on by an embolism and died. Barclay James Harvest Featuring Les Holroyd continue as a six-piece without Mel, touring extensively in Europe, issuing a live CD and DVD with the Prague Symphony Orchestra and planning a new studio album.

John and Woolly started work on a second studio album, with the working title North, but for personal reasons John didn’t feel ready to make an album and it was shelved. Woolly decided instead to make a solo album, working with Craig Fletcher and drummer Kevin Whitehead plus original Mæstoso guitarist Steve Broomhead. The album One Drop In A Dry World was launched at a one-off London concert in May 2004 with Kim Turner of the original Mæstoso band in the drum seat, and was followed by the live CD, Fiddling Meanly, and two more studio abums, Grim (2005) and Caterwauling (2007).

In 2006 John and Woolly reconvened the band, now rechristened John Lees’ Barclay James Harvest, and set out on the first full UK tour by any members of Barclay James Harvest since 1992. The London show at the Shepherds Bush Empire was filmed and released in November 2007 as a DVD and CD entitled Legacy. 2009 saw increasing activity from the band, with live shows in the U.S.A., Portugal, Germany, Switzerland, Holland and Belgium, plus another UK tour, and the work rate continued into 2010 with songs being written for a new studio album, plus a summer festival appearance in Portugal at the Douro Rock and Blues Festival. It would prove to be Woolly’s final live appearance. A recurrence of a severe depressive condition meant that he was unable to participate in a series of concerts with John Lees’ Barclay James Harvest in November and December 2010, and on 13th December, tragically, he was found dead at his home.

In order to keep Woolly’s music and the classic Barclay James Harvest sound alive, JLBJH decided to continue to tour and record as a four piece band. Their first gig following Woolly’s death was a rapturously received concert at the Buxton Opera House, and was followed by the announcement of summer festivals, including headlining the Prog Stage at the prestigious High Voltage Festival in London. The story continues … 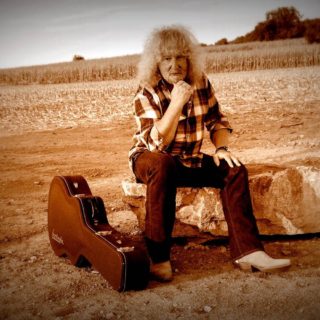 The Barclay James Harvest story begins in the early sixties in the Oldham area of North-West England. John Lees and Stuart “Woolly” Wolstenholme met at Oldham Art School, and formed a band called The Sorcerers, which evolved into The Keepers. Meanwhile Les Holroyd and Mel Pritchard were playing in another local outfit rejoicing in the