Bananarama have had huge success throughout the world including the USA. They still hold their place in the Guinness Book of Records for the most charted Hits by a female group.

Bananarama have had huge success throughout the world including the USA.
They still hold their place in the Guinness Book of Records for the most charted Hits by a female group. (34 hits,  29 self penned.)’

In 1981 a debut single storming to Number 92 was the beginning of something rather exciting. From their debut single storming the Top 100, through the multi-platinum studio albums and a million-selling Greatest Hits compilation, Bananarama’s story has always been fresh. You might look at what came before and think, briefly, that Bananarama rewrote the pop rulebook; in truth they never read it in the first place and for over thirty years have been calling their own shots, making theirs a name synonymous with bright, sophisticated and authentically brilliant pop music.

In the early 1980s they approached producers Jolley & Swain on the strength of their work on Imagination’s ‘Bodytalk’, resulting in hit singles like ‘Shy Boy’, ‘Cruel Summer’ and ‘Roberts De Niro’s Waiting.’ A few years later they heard Dead Or Alive’s ‘You Spin Me Round (Like A Record)’ and decided to work with Stock Aitken & Waterman on ‘Venus’, ‘Love In The First Degree’, ‘I Heard A Rumour’ and ‘I Want You Back’, which led to an entirely new phase for the band with 1987’s ‘Wow!’ album. As recently as 2005 they were picking out Swedish hitmaking team Murlyn and in 2009 they found a perfect foil in Ian Masterson, a producer whose credits range from Pet Shop Boys to Girls Aloud and whose instinctive grasp of the Bananarama spirit has resulted in some extraordinarily good music on recent albums.

Whilst Sara was studying journalism at the London University of Arts, and Keren was working at the BBC the childhood friends bumped into ex Sex Pistol Paul Cook in the club Taboo. About to be thrown out of the YWCA for “keeping late hours” he invited them to stay in the office above the Sex Pistols rehearsal room. He ended up producing their first single. One early play from John Peel was all it took for Bananarama – Sara, Keren and original third member Siobhan Fahey – to catch the attention of The Specials’ Terry Hall, who tracked the girls down and asked them to perform on Fun Boy 3’s ‘It Ain’t What You Do It’s The Way That You Do It’.  They went on to support everyone from Iggy Pop to Paul Weller (Weller went on to pen a track for the band’s first album), appearing on Saturday morning telly while still being so skint that they were using the baths and the local swimming pool for 50p a throw. “We didn’t think it would get past one single,” Keren laughs, “and we didn’t really care.”

For the next ten years the girls were everywhere, and so were their hits, from ‘Rough Justice’ tackling the political tensions in Northern Ireland to ‘Love In The First Degree’ pioneering the relationship-as-courtroom-drama extended metaphor. Bananarama became internationally hot property, with ‘Venus’ scoring a US Number One and ‘Robert DeNiro’s Waiting’ paving the way for the now legendary meeting between the girls and that Hollywood superstar.

In 2009 popstars fetishise prescribed notions of credibility and fall over themselves to prove their songwriting talents – back then Bananarama didn’t ever really shout about their own songwriting, firstly because they actually did write massive hits so there was no need for the ladies to protest too much about it, secondly because, well, why wouldn’t they have written their own songs? Old habits die hard: this new album had started life as a sort of concept album in which Sara and Keren would cover some of their favourite songs, but the duo found that studios were associated so strongly with songwriting that it wasn’t long before they were both writing new material. So much new material, in fact, that now only three covers remain: ‘The Runner’ (originally by The Three Degrees ), ‘S-S-S-Single Bed’ (originally a hit for Fox) and ‘Rapture’, a more recent hit by Iio from 2001. And then there are the new tunes: ‘Seventeen’ is an undulating, low-slung electro number which pleads “kiss me like you do in my dreams, make me feel like I was seventeen”, then there’s seductive, ice-cold ‘Extraordinary’ and the single ‘Love Comes’ – a dancefloor belter with no strings attached.

No matter. In a notoriously flighty corner of a relentlessly transient industry Bananarama continue to stand tall as a pop group who actually mean something. “I do think we stand for the same thing now as we always did,” Sara says. “We worked so hard to get recognition – it’s never been something just handed to us on the plate or manufactured. It’s a feeling we both have that there’s still a drive to find the next door to open, the next song to write, the person to work with, the next concert to play.” All of which would be pleasant but ultimately pointless hot air if ‘Viva! Bananarama’ was anything other than great because in pop, more than any other genre, it all comes down to whether your tunes are any good. It seems to still come so easily for Bananarama, masters of their own destiny and the reigning queens of UK pop. 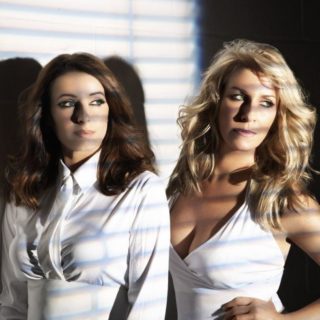 Bananarama have had huge success throughout the world including the USA. They still hold their place in the Guinness Book of Records for the most charted Hits by a female group.